Still reeling from their first encounter, can the Doctor and her new friends stay alive long enough in a hostile alien environment to solve the mystery of Desolation? And just who are Angstrom and Epzo?

Let’s get one thing out of the way: Jodie Whittaker is the first woman to take on the role of the Doctor in the British television staple Doctor Who, a pivot in the historically male casting that’s 55 years in the making. But we don’t talk about that much when the newly minted Time Lord visits Bustle HQ during her whirlwind NYC press tour. While it’s an admittedly huge step for the franchise to finally hand the TARDIS over to a woman, there’s so much more to celebrate and analyze about the new season (which kicked off Oct. 7 and airs every Sunday on BBC America) and its new star.

But if you’re a little confused by the terms “Time Lord” and “TARDIS” or unsure how exactly to jump in to a series that aired its first episode back in 1963, know that Doctor Who’s rich history is based on reinvention: the arrival of a new Doctor always starts a new chapter in the series, which makes for easier entry. The idea of presenting a fresh start was heartening to Whittaker, who was new to the fandom when she decided to throw her hat in for the part.

“I’m a new Whovian, and I’m new to this whole world,” she says. Thankfully, being a die-hard fan is not a prerequisite for joining the cast. The show’s eponymous character literally regenerates every season, meaning each new version of the character — Whittaker is officially No. 13 — is unique in personality and appearance while retaining the same memories. “Doctor Who celebrates change and inclusivity and regeneration, and that has to be for all,” she says. “It can’t just be for people that know it.” 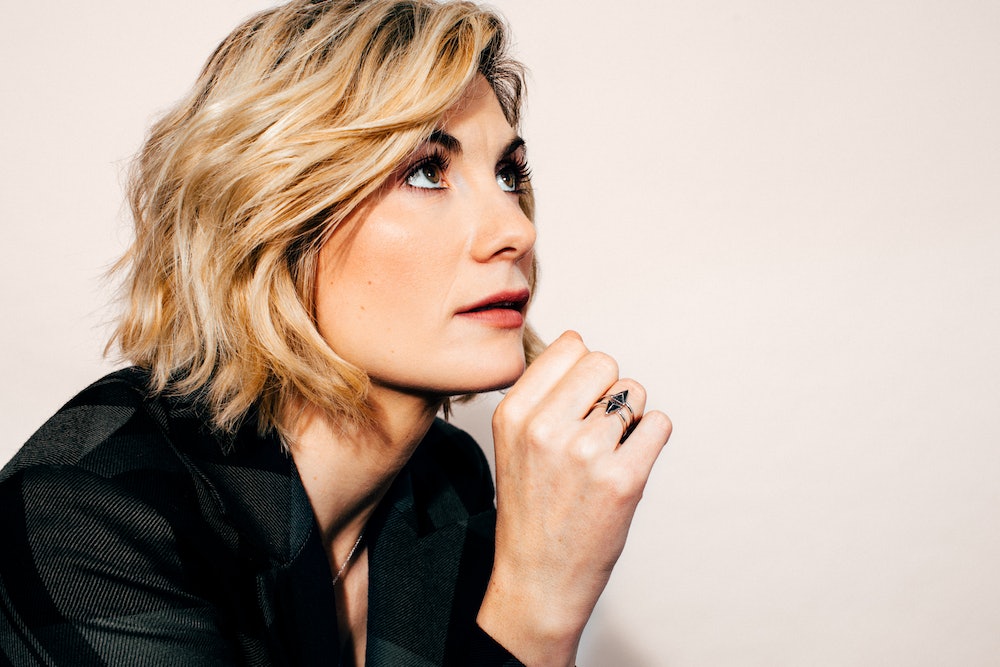 It’s a little surprising that, unlike several past Doctor actors, Whittaker didn’t grow up following the show and idolizing the time-traveling alien who picks up strays and shows them the universe. Because despite a schedule packed with appearances — including premiering her first episode in front of 5,000 people at New York Comic-Con — she’s all friendly energy and excitement on this Friday morning, much like her incarnation of the character. And, also like the Doctor, Whittaker immediately makes herself at home. The first thing she does when she steps into our studio is make a beeline to the computer’s Spotify to pull up some music for the shoot (it’s electronic artist Pete Tong, whom she raves about between the photographer’s flashes).

I think to limit it to a sci-fi genre in its label does it a disservice because it’s its own genre, in a way.

END_OF_DOCUMENT_TOKEN_TO_BE_REPLACED

Doctor Who 11×01-The Woman Who Fell to Earth Screencaptures

Screencaps from Jodie’s amazing debut episode of Doctor Who have been added to the gallery! What did you all think of the episode? I loved it! I cannot wait to next weeks episode. Enjoy viewing the screencaptures.

‘Doctor Who’ star Jodie Whittaker on how gender is irrelevant: ‘The Doctor is the Doctor’

USA TODAY-British actress Jodie Whittaker was hardly a familiar face, at least not until recently.

“Being recognized on the street was maybe (like), ‘Oh I think I know who that is,’ or being kind of looked at in a quizzical fashion, ‘Did we go to school together?’” Whittaker says.

But after the BBC anointed her as the first woman ever to step into the iconic lead role on “Doctor Who” in July 2017, that all changed.

“It’s strange to have someone know exactly who you are and at what point they’re going to be seeing you play this role,” she says, just two days before her first full episode as the Doctor in BBC America’s season premiere (1:45 p.m. EDT/10:45 a.m. PDT, and 8 EDT/PDT). 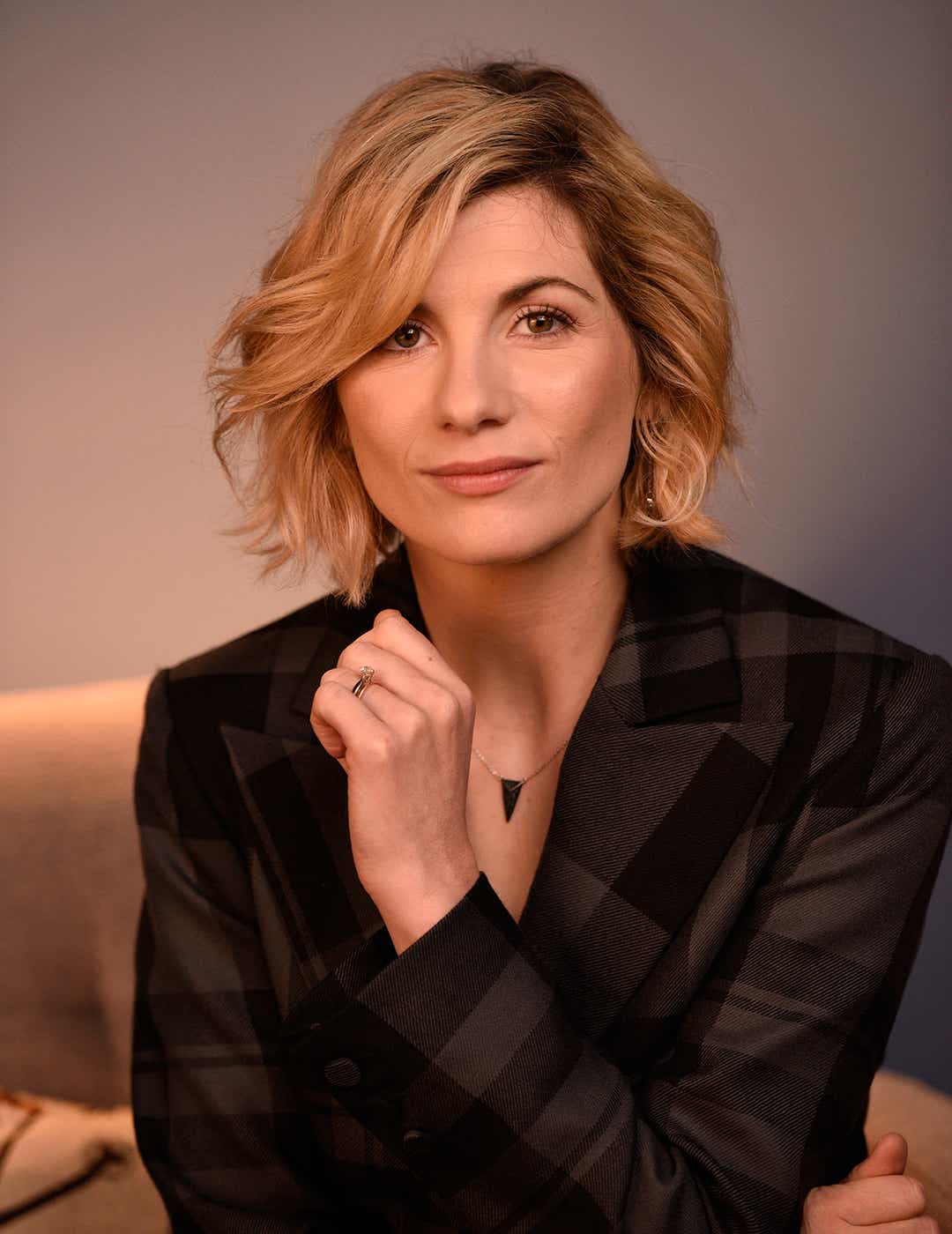 Jodie Whittaker stars as the newest “Doctor Who” in the BBC’s storied franchise — and the first woman doctor. Robert Deutsch/USA TODAY

“It’s a wonderful thing, but (it) can be quite overwhelming at times to know that no matter how many Doctors there will be, I’ll still be one. It’s a job for life in a way that no other is.”

Despite all the trappings, baggage and pressure that comes with the role, Whittaker is remarkably chill about her big debut.

“I wanted to approach it like I approached any job,” she says. “I think this is one of the first times I’ve been able to bring what is my in-between-scenes personality, which is a very different thing. I talk a lot and I jump from subject to subject and I love the physical energy required of this role, and it bleeds into life.”

Whittaker and new “Doctor Who” head writer and executive producer Chris Chibnall caught up with USA TODAY to talk inclusion, monsters and whether the Doctor can actually remember that she’s a woman. 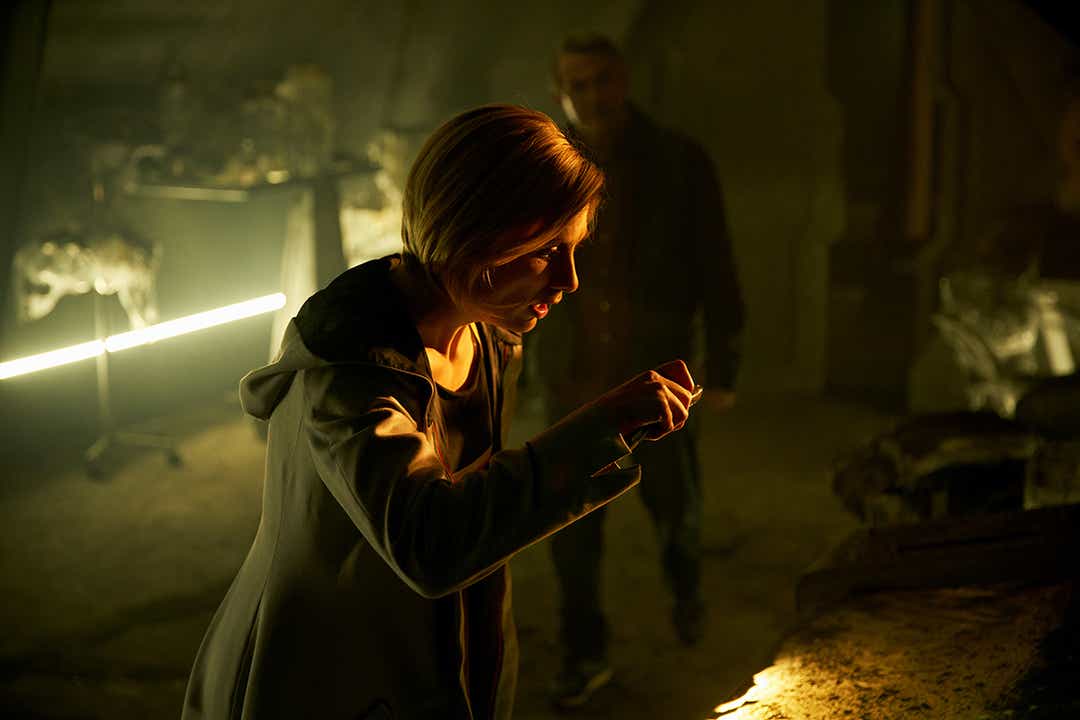 Jodie Whittaker in action as the Doctor on “Doctor Who.” BBC Studios 2018

Question: Your casting meant a lot to me. How has it been over the last year hearing from fans? Is it overwhelming?

Jodie Whittaker: It’s been incredibly exciting knowing we’ve got a huge fan base before we’ve put in an ounce of work. It’s all over the world, and the response being mostly euphoric was excellent. … And now, being able to share all this hard work with all the fans and potentially new fans, it’s a long time coming and we’re really, really excited by it.

Q: The casting was announced just a few months before the #MeToo movement kicked off. Does the new era we’re living in change your perception of the significance of the role?

Whittaker: During the year it felt as if this was a timely moment. … The thing about it is it goes with the package, it starts a conversation. 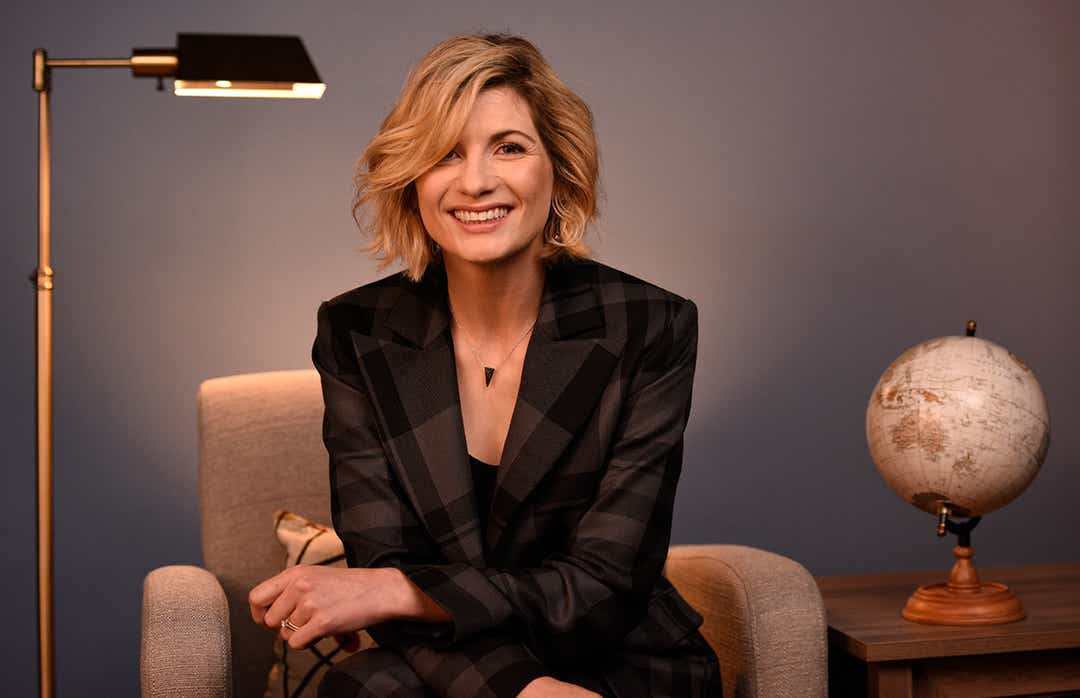 Q: The Doctor often travels to the past. How will you deal with the her  going to historically sexist eras? Will that change how the Doctor is perceived as she travels?

Chris Chibnall: Yes, we will go into historical eras. When we get to the third episode you’ll see us in–

Whittaker: You’re not allowed to say that!

Chibnall: I can’t remember what I’m allowed to say at this point! … When we go into history we will be obviously dramatizing the appropriate reactions to the Doctor in that time, so it’s not going to be ignored.

Whittaker: No it’s not. … There’s a conversation around it, as (there) should be. (But) the gender quickly becomes irrelevant, because the Doctor is the Doctor. But what is great is other people’s or other worlds’  reactions to that, reminders that it would be relevant at certain moments. But it certainly isn’t every scene. It’s not for me and you walking through life, so it certainly shouldn’t be for the Doctor.

Chibnall: If this doesn’t sound a strange response to that, it’s also a great opportunity for unexpected humor. How the Doctor reacts to people reacting to her differently when she’s in historical periods. … Often the Doctor forgets that she’s a woman. So there are points where people are responding to her and she goes, “Oh, OK. I’ve got to get used to that.”

More: Jodie Whittaker is glorious as the first female Doctor in full ‘Doctor Who’ trailer

It’s been awhile since the Doctor has had three companions (played by Mandip Gill, Tosin Cole and Bradley Walsh). Why did you make that call?

Chibnall: Well I always wanted a gang of people in the TARDIS, I love that, and also what’s interesting to me in the show is how you explore different personalities, different relationships, different (emotions) across the course of a series. … And I just felt like the show hadn’t done that for a long time. Plus it’s sort of going back to the very, very, very original DNA of ‘Doctor Who,’ which had three (companions) in the TARDIS, and I wondered what would be like if you applied that to 2018.

This season we’re getting all new monsters for the Doctor to face, as opposed to other seasons that have brought back classic villains like the Daleks. Why is that?

Chibnall: One of the great joys of “Doctor Who” is new monsters. There is a whole universe out there of creatures and villains and monsters that we haven’t seen yet. I wanted Jodie’s Doctor, and the generation of viewers who will watch and the generation of viewers who will join with Jodie and this gang, to have their own monsters with some surprises in there. And (I wanted) the antagonists in every story to resonate with the world now, the world we live in now in small ways or big ways. And I wanted to show the range of what we could do, really. I also think it keeps up mystery. Lots of “Doctor Who” storytelling is about what is the monster and what do they want and what are they doing and how do we stop them, and this felt like a really good time to do it.

Not to say we won’t do it in the future, because I am as big a fan of the show as anyone. So it’s really tempting to go, “Ooh let’s go and bring back the Kraals,” or something, but there’s also new things to explore. (It’s) the biggest toy box in television.

What part of being the Doctor that you were most excited about?

Whittaker: The freedom of expression. With the Doctor, there’s no etiquette constraints, there’s no social expectations because she’s an outsider continually, but (someone) who is always passionately learning and never abusing her hindsight to judge.

Jodie appeared on AOL Build in New York today, I’ve added images to our gallery enjoy viewing them. 🙂 I have also included videos of her interview that AOL Build have shared on their Youtube Channel.

Jodie made her american late night television debut on The Late Show with Stephen Colbert, I’ve added images of her arriving&appearing on the program, enjoy. Be sure to follow the sites twitter account for more updates @JWhittakerFan

Jodie visited the Sirius XM Studios today in New York, I’ve added photos to our gallery from her appearance. Be sure to follow the sites twitter account for more updates @JWhittakerFan

HQ Episode stills of Jodie’s first episode as the Thirteenth Doctor entitled “The Woman Who Fell to Earth” have been added to the gallery, enjoy! (Don’t forget Doctor Who airs Sunday October 8 @ 6:45pm on BBC One)

2018-Doctor Who
The further adventures in time and space of the alien adventurer known as the Doctor, a Time Lord/Lady who can change appearance and gender by regenerating when near death, and his/her human companions.

Jodie Whittaker Fan is a non-profit fansite, 100% unofficial, and has no affiliation with Jodie herself or anyone around her. Please do not send any fanmail to us for they won’t be forwarded to Jodie. All photos are copyright to their respective owners, no copyright infringement is ever intended. Any material seen on this website and is used, to the best of their knowledge, under the “Fair Use” copyright laws.

For optimal viewing: This website is best viewed in a resolution of 1024 or higher, 32 bit color, and in Mozilla Firefox. Javascript, CSS and Tables.

All graphics and original content belong to jodie-whittaker.com All images are copyright to the their respective owners, the webmasters claim no ownership and receive no financial gain for this site. We do not support stalkerazzi of any matter. For more information, please check our disclaimer.

This is an unofficial website!
We have no official affiliation with Jodie Whittaker or her management.